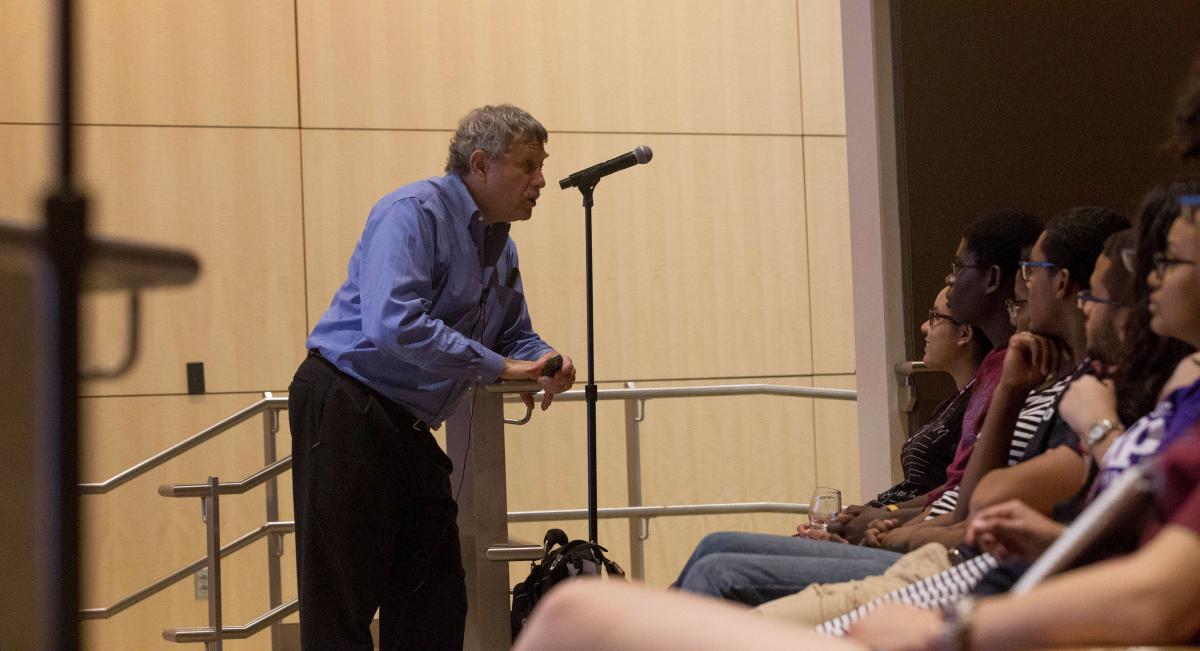 Eric Lander, President and Founding Director of the Broad Institute of MIT and Harvard speaks to MITES students.

Eric Lander, President and Founding Director of the Broad Institute of MIT and Harvard and one of the principal leaders of the Human Genome Project delivered a rousing lunchtime talk to MITES students this July, touching on the past, present, and future of scientific research.

Selected from a highly qualified pool of applicants spanning across the country, the 80 MITES students were exposed to a number of science and engineering fields this summer. Lander was one of many guest speakers to visit throughout the 6-week, residential program. Recognizing the promise and potential of the audience before him, Lander affirmed, “This is an environment that will change your lives.”

Despite the accomplished resume under his belt, the principal leader of the Human Genome Project seemed more interested in discussing scientific advancement than his own personal achievements and jumped directly into a historical overview of scientific pioneers. With the Human Genome Project behind him, Lander recognizes the evolutionary nature of scientific research, a job that’s never really finished. When genetic coding research began in the 1960s for example, scientists believed that the discovery of DNA and RNA meant project completion. With the beginnings of the Human Genome Project, Lander and his team proved otherwise as they explored genetic mapping, sequencing, and cloning. “If something is so important, then over 100 million years ago it was still important and will continue to be important beyond us,” he says of DNA.

Crediting the expansion and success of the Human Genome Project to an innate sense of tenacity, Lander encouraged his audience to channel a similar drive, predicting, “Your generation is the generation that’s going to take all of this information and say ‘how are we going to put this together and make a story.’”

Lander acknowledges that he isn’t exactly where he ever imagined he’d be at the age of MITES participants. He studied mathematics at both Princeton and Oxford, and when asked about his ability to successfully transition from math to science without formal education, he laughs. Using the question as a means of directing conversation towards the MITES students’ futures, Lander took the time to assure them that they should never feel pigeon-holed by any career-based decision.

Ending the talk with a Q&A, one couldn’t help but be inspired by the genuine curiosity throughout the room.  With students asking questions regarding sequencing, annotation, and targeting, their excitement to simply be a part of a greater scientific community became even more apparent. Highly encouraging towards his audience of aspiring scientists and engineers, Lander finished on a note of inspiration, exclaiming, “It’s so cool to be a part of a story that’s most interesting chapters are still to be written.”